It’s a little bit slow (110bpm), with an electro-pop dance party vibe and a sprinkle of darkness. Enjoy!

There are many sides to Hannah Johnston, a Usability Interaction Designer at Google based in NYC. For the last two years, she has worked on Google’s Search UI, which is to say the face of Google. For instance, she designed several features of the new Knowledge Panel feature, which Hannah points out as being quite useful when you’re searching for things “like celebrities, or mountains”.

How did Hannah get to be a UI designer? Unlike Software Engineering, where you generally study in an undergrad CS or engineering program and maybe some grad school, there is no standard course of study for UI Designers. In Hannah’s case, she started out at Carleton University in her hometown of Ottawa, Canada studying Industrial Design. But in her words: “I got sick of designing furniture”. In between school years, Hannah worked for Virtual Ventures, a computer camp hosted by Carleton that has produced a surprising number of Google’s senior engineers. “I found that I really liked what I was working on at the camp”. Around that time, Hannah ran into a high school friend at Carleton who was studying in the Bachelor of Information Technology program. “The stuff she was studying was pretty much what I was doing in my spare time for fun”. So she made the switch. Having found her calling, she ended up winning the Governor General’s medal, the award for the 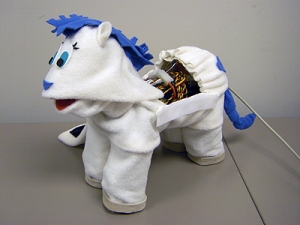 top student in each program, and went on to complete her Master’s “on the design and development of customizable game elements for a massively multiplayer online, dance-based exergame”. As part of her degree, she and a classmate made a walking, talking pony, pictured here.

Having been prodded by her over-bearing older Tech Lady sister to apply to Google, Hannah did an internship in Google News UI in New York the summer before she completed her master’s. While she had considered teaching at university until that point, the Google experience convinced her to try out industry for a while. In addition to shaping the UI that hundreds of millions of Google Search users interact with every day, Hannah contributes to Google’s fun social culture with the “art + gelato” campaign that she co-organizes. This is surprising given that Hannah has a self-described reputation as a hardcore introvert. “I could give a TED talk on Exiting Gracefully 101”. She also maintains balance in her life by walking to work (6 miles, every day!) and occasionally writing her blog How to be a Grownup (like a Pro). She is also an amateur DJ, producing monthly mixtapes of new (and some old) music she’s been listening to lately. Her mixes have been declared by my boyfriend’s certified hipster borther as “cool”.

In spite of her shy tendencies, she emphasizes the importance of networking, but doing it in a way that works for you. “7pm cocktail hours are death”, she says. Instead, she finds other ways: “When I meet someone, I ask what they’re doing – it’s an easy conversation starter”. While Hannah doesn’t think that this is something that women need to do differently from men, it’s important that they don’t shy away from networking even if it makes you uncomfortable. In particular, she points out that you shouldn’t avoid talking to someone just because what they’re doing looks hard. “I also email people who are doing cool things – some will get back to you, some won’t, but I’ve made some good contacts this way”. Unlike software engineering, with its glaring gender disparity, the women:men ratio in design is around 2:3 by Hannah’s estimates. However, like in software engineering, the disparity grows dramatically as you move up the ranks, highlighting the importance of professional networks for women.

What’s playing at Hannah’s dance party? “Some embarrassing stuff, like Biggie Smalls”, but if she has to pick one song, it’s The Look by Metronomy.

(Programming Note: Tech Lady All-Star interviews will be a regular feature. If you or someone you know is a tech lady all-star, forward your suggestion to techladyallstars@gmail.com)